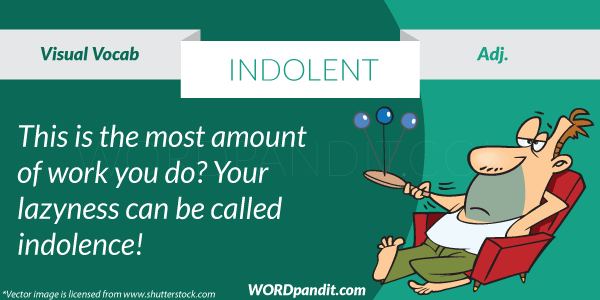 In general, most people are indolent at some point of time. They like to have a laid back time and spend some time off work. But if one gets in the habit of doing so, then it becomes a problem. Indolence can also lead to layers of fat adding on to your body and slowing down of the brain due to a lack of use. These are the outcomes of indolence.

Indolent carries the following dictionary definitions:
1. Having or showing a disposition to avoid exertion; slothful: an indolent person.
2. Pathology: Causing little or no pain; inactive or relatively benign: an indolent ulcer that is not painful and is slow to heal.

Usage examples for Indolent:
1. Indolent by disposition and indulgence, he makes very short stages in his ordinary travels, rarely moving more than from eight to twelve miles in the day, and this he does so leisurely and quietly.
2. Indolent employees can be pain in the ass for the employer.