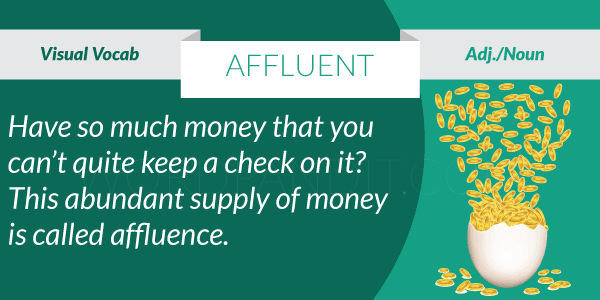 The word symbolic of power, prominence and above all prosperity: Affluent.

It signifies riches to the extent that one no longer needs to worry for money in life, a dreamlike state that all mortals aspire to at a certain stage of life (exception to the rule: saints and sages).

Affluent is also used for the tributaries of a river. Tributaries are small rivers that flow into the main river. Perhaps, this is the place from which the word derives its main meaning:  flowing in money or wealth.

The dictionary definitions for affluent are as follows:

4. A stream or river that flows into a larger one; a tributary. (noun)

5. A person who is well-off financially. (noun)

1. The last year has in general seen a reduction in affluence, and the rich seem to have gone down a little quieter in their celebrations.

2. The difference between the schools in the affluent areas of the city and the ones in the poor ones is alarming and shocking.